A previous post about my father, “Dad Man”, surfaced recently, in my mind.  The nickname came about from me and my brothers.  More commonly known as Bill Davis, he was referred to by his close friends as “Billy”, or “Wild Bill”.  My Dad finished his race well that morning, June 24th of last year (2016),  transitioning into eternity.  The U.S. Navy provided a flag ceremony at his  funeral.  Dad served as the XO (executive officer), reporting to the commander.  Dad  cruised the South Pacific in WW2 on the

During WW2, most minesweepers were mechanical.  “Sweeps”, or “sweep wires”, were submerged into the water, down to where the cable held the mine in place.  The sweep wires of the minesweeper then cut the cable, sending the mine up to the surface.  A sharpshooter then detonated the mine.  The first drawing is of a mechanical minesweeper.

The second drawing is of a more advanced minesweeper, which uses a “pavane”, similar in shape to a small plane. 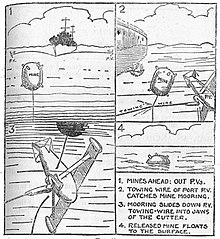 My imagination places me on Dad’s ship, the  USS PGM 22, Dad in his U.S. Navy khakis.  I would have sat in the briefings, in the back, with others, while he issued the ship’s orders, and talking to the guys.  Now Dad Man is up in the heavens, cruising on a most excellent patrol boat minesweeper, where there are no mines, hanging out with all of his shipmates, and other Navy guys he never met in the war.  This post is about the grieving and loss we experience; and the joy of knowing others we love and care deeply about.  We explore the lives of those who have gone before us, who have finished their race.  We are on our own ships … maneuvering through the mines, using our sonar, thankful for a new day.