The breaking or violation of a presumptive social contract, trust, or confidence that produces moral and psychological conflict within a relationship among individuals, between organizations or between individuals and organizations.

Standing up on a rock cropping in the mountains … 9 to 10 thousand feet elevation … watching a mass of evergreens  when the wind comes toward you is a beautiful image.  You can see the wind move in the distance, the trees nodding their crowns toward you, closer, closer, closer, and the force glides past you, over you, through your hair.  And then, it is gone.  Some friends are like that.  A “friend” is not always a friend.  It is one thing, someone speaks  something difficult to hear, with some measure of truth.  It is another thing to, as in “prodito” … break / violate a social contract / trust / confidence … that brings about moral / psychological conflict within a relationship.

My family and I went out on a limb to help someone … a friend … a few months ago.  Over a period of about ninety days, we bought them meals, provided transportation with the bigger goal in mind of helping them get on their feet.  We helped them with expenses.  We were like family.  Then, things started to “go south”, gaining momentum.  I talked to the man, drew a clear boundary, with a calm voice, tactful words, and clarity.  Result?  He went berserk.  I read a number of pieces about betrayal; spent a few hours pondering the reality and concept of betrayal; processed the impact this had on me, along with my family.  I am actually curious if any of my fellow bloggers have identified some of these “categories”, themes, thoughts and emotions.

I know there is more to all of this.  I am interested to know how others have handled betrayal, and what their experience is.  I know that I can learn from this, regardless of my own pain.  I also know that prodito was in the house for a short while.  But no more.  And in the same house, which is our home, hope rolls on.

April, I walked into the trees, climbed up on a rock, belted out a song and a high spirited howl of joy.  Spring was (cautiously) emerging!  Winter was waiting in the wings until our guard was down.

By May, winter left town.  Summer came too soon, pushing spring out.  An injustice, Spring had flown the coop, way too early.  Seasons can be harsh, unfair, fickle.  Indeed, spring had slipped out the back, Jack.

In the “here-and-now”, leaves are turning their colors, gradually gliding downward.  A one-time dusting of snow came, September.  Other than that, we are holding on to fall as long as we can. 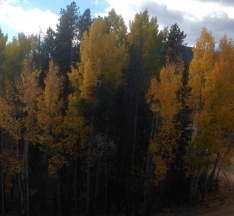 I am in another season: I am pushing through a few barriers of resistance.  Any of us, at any given time, may find ourselves in such a place; our awareness tells us that change is important; but the change is delayed.

The delay comes out of our reluctance to change; the reluctance comes because there is a “pay-off”.  We are getting something we want from that which needs to change.  To break through the barriers of a difficult season: I need a blend of specific, trustworthy, wise, supportive, and sensitive  individuals to walk with; and I need some time to “sit in” a desert place of pain, to think through the process, the motives for wanting to leave what is familiar, and the implications of stepping into (again) the unknown.  What will change look like?  Peace be with you, sojourning bloggers.  Keep writing.

Many months ago, I wrote a post about a kiddo … an autistic boy, 11 at the time … charged with a felony, because he kicked a chair at school.  A police officer handcuffed Kayleb.  Two weeks later, Kayleb was told, when school let out, that he had to stay after school.  This young autistic boy became agitated, especially as the school police officer laid hands on Kayleb, and then handcuffed Kayleb (again).  This story has a good ending.  For over a year, it was a very, bumpy, ride.  I’ll come back to that ending.

When was your last bumpy ride, fellow bloggers and epic adventurers? You are in the midst of one, now?  Yeah.  Me, too.  Writers write, one of the reasons is to RELEASE “it”: the ridiculousness of the chaos we are in; the frustration of being immensely frazzled; the heaviness in our hearts because we worn down, discouraged, wondering if we are going to get through this one …  And there are more battles beyond this one.

Sunday, when we arrived back from the city, to the Other Side of the Trees, we had no water.  I tried all possible options for what the problem(s) were.  Nothing worked.  I found the 7 gallon blue water containers, and went to our neighbor who lives about 100 yards up the mountain.  Here it is Thursday night, and still no water.  But … we do have the “diagnosis”.  It’s not what we wanted, but, at least we know the problem.  We have to replace the well pump.  I think, the well is 75 feet deep, which is nothing compared to some folks.  Hopefully, he will be here tomorrow.  Water?  I don’t know, hopefully tomorrow, but most probably Saturday.  It’s really stressful to not have water.  The same day that Water Man came to diagnose our “up-creek-without-a-paddle-situation”, I had to go into the city to get my friend, Brake Man, to replace the brake pads.  Indeed … what a bumpy ride.

Now, back to Kayleb’s story.  Kayleb was going to be an 11-year old felon for getting agitated, and two weeks later resisting a police officer when the officer tried to restrain him.  About 150,000 people from all over the planet joined the fight, calling out for Kayleb’s justice, for all charges to be dropped.  I received an EMAIL  March 14th with the good news that Kayleb’s charges were finally dropped.  The boy is 13 now.  REALLY?  It took THAT LONG … to clear this up?  Indeed.  A very bumpy ride.