I worked with high-risk adolescent males in a residential treatment facility (RTF), years ago, up in the foothills of Colorado, 45 minutes west of Denver.  It was an older house, well-built, fairly large … originally a bootlegger’s house during the Prohibition.  A (hidden) trapdoor from the main floor provided an escape route down to the garage: the gangsters’ getaway car parked and ready to go at a moment’s notice.

Fast forward to the (RTF) in the late nineties: we had a cross-section of kiddos, a variety of criminal offenses.  One young fellow showed up, transported to our facility by county sheriff officers, handcuffed in an orange AWOL jumpsuit (not uncommon). “AWOL” (Absent WithOut Leave) referred to an individual who was a “runner”.  “Without Leave” simply meant leaving without permission.  This boy frequently tried to escape the supervision of police and treatment staff.  Some AWOL’s were fast; others,  not so fast. This particular kiddo (I learned the hard way) was one of the fast ones.  I stood at the counter processing the paperwork, saw that the boy had slid over from a bench on one side of the room to a bench closer to the door.  I told him to get back to the other side of the room.  He stood up, started back, but like a flash turned around, rocketed himself out the door.  The chase was on, around the corner of the building.  We sprinted through the trees.  Uphill, downhill.  I was keeping up with him, calling out to other staff on the property “RUNNER!”  He raced downhill, dropped to the ground, and I flew over him.  I came crashing down, close to a fence.  I saw the boy breathing hard, trying to get air into his lungs.  He jumped up, made for the fence. I grabbed him by his AWOL jumpsuit, and brought him down to the ground.  The next two times the boy ran, I never caught him.  The last time I saw him, he was walking all so carefully across a frozen pond; amazed that he was so brazen to walk barefooted across the ice surface of the pond … ice that could break open at any moment and swallow up the kid.  What a runner.

Runners.  I will never forget that kiddo.  I wonder where he is now. I think about myself, post-highschool and college years.  I had my own style of running.  I ran from my story, my family, my southern town, my calling, my fears.

In those realms of isolation, emotional instability, passionless living, our callings are distant; and the fear of living grows. And when fear grows, we run.

On the other side of the trees, we have seen some beautiful, cloudless nights this week.  Clarity, to see things more clearly, frees us up to think.  So many times, what we are looking at is hiding what is real, what is authentic.  Fear is real, overt or covert.  Hidden fear takes on different identifiers.  These guys … the Mudmen … the Holosa …  live in the Eastern Highlands of Papua New Guinea, outside a village, “Goroka”.  The story handed down, through four generations, is that an enemy tribe defeated the Asaro Holosa, who fled into the Asaro River. At dusk, the enemy saw them rise from the muddy banks covered in mud, and thought they were spirits.  The enemy fled in fear, and the Asaro Holosa escaped … 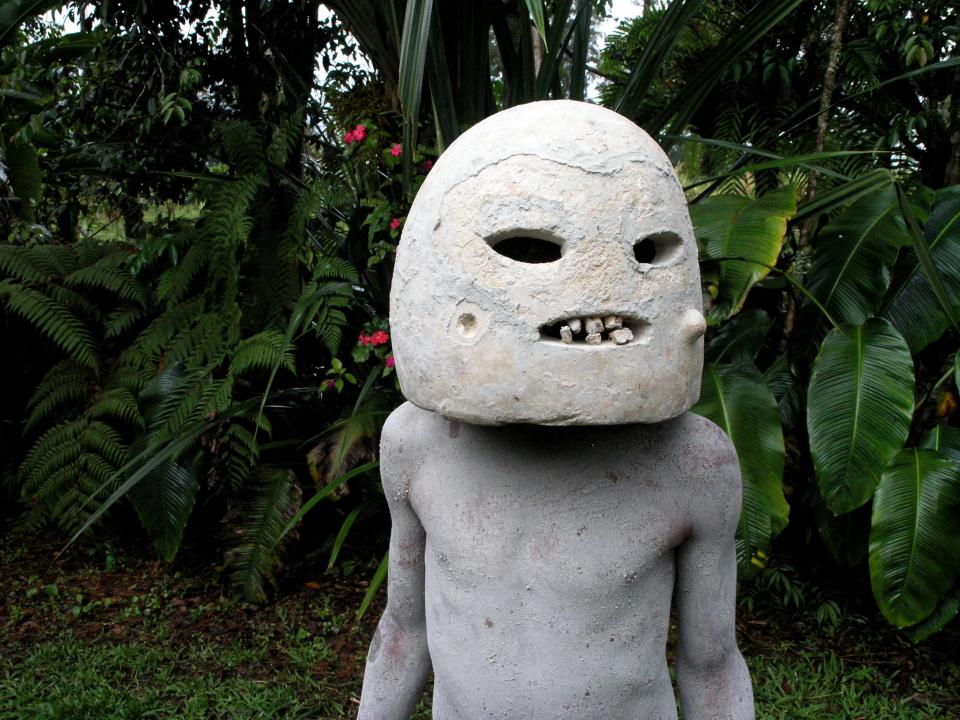 and returned to the village, not knowing the enemy tribesmen were still there. The enemy, terrified by what they saw, ran back to their own village and held a special ceremony to ward off the spirits.

The Mudmen could not cover their faces with mud;  the tribes of Papua New Guinea thought that the mud from the Asaro river was poisonous. So instead of covering their faces with mud (thought to be poison), they made masks from pebbles and muddied water, heated from fire.  The Asora Holosa became known as “the Mudmen”.

The masks have unusual designs, such as long or very short ears either going down to the chin or sticking up at the top, long joined eyebrows attached to the top of the ears, horns and sideways mouths.   Masks emerged, for the Asora Holosa, to overcome their fear, and to hide their fear.  The Mudmen’s faces were also used to create fear in their enemies.  What we do in our own lives, to deal with our fears, oftentimes involves how we present ourselves. Masks play a role … masks of a different sort.  The Mudmen feared not only the enemy tribesmen; they feared mud … that led them to these grotesque masks.  I am not a Mudman, at least not in the conventional, original sense.  My masks are far more sophisticated.  My fears, more complex.  And yet, I am a man who moves out of my strength, my courage, out of a wounded and redemptive heart.  I move, from the Other Side of the Trees … then, back again.